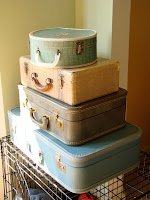 What do we want? To be upgraded, clearly. But given that's unlikely, what we want is to be as comfortable as possible on a long haul flight. Now clearly Australians should be experts at this, because where ever we go, it's all long haul.
This checklist doesn't include what's in the ziplock bag - keep an eye out for a separate ziplock bag checklist coming soon, as well as more details on avoiding jetlag. In the meantime, here's the list explained:
Click here for your free downloadable www.kilometerage.com handluggage checklist


Take off and landing
The most exciting part of a flight. I love takeoff, but as soon as it's over I'm like a five year old and it's all "Are we there yet?" and "When are we going to get there?
Your ears may pop, however. Chewing gum helps prevent this, and so does holding your nose shut and blowing - a maneuver you may be surprised to know has a name, the Valsalva maneuver. It's kind of gross just sitting there blowing your nose, which is why I've included a hanky or tissues in the packing list along with the gum. If you're a small child who can't be trusted not to swallow the gum, try a lolly instead (sweets or candy if you're a foreigner). Very small children should be breastfed, bottle fed or at least given a dummy for takeoff and landing, as this helps relieve the pressure in their ears (and also in everyone else's ears, as we won't have to listen to them scream).

As you know, your iPod can make the plane crash* (as can any electronic device) so they need to be turned off - if you've got a low boredom threshold, make sure you have a book or a magazine in your seat pocket so you've got something to do until they turn the seat belt off.
Eat
Lots of people swear by ordering a special meal. Of course if you have special dietary requirements, you kind of have to, but I've tried this and I always get a bad case of menu envy. You end up with some shrivelled looking vegetable thing while everyone else has a chicken stew that smells half way decent and a slice of chocolate pudding. Of course, that's if you get a meal at all - fly a low-cost airline and you might actually starve. I like to bring small snacks because airline meal times are erratic at best, and sometimes I'm not hungry at the right time. I also do a modified version of the jetlag diet (more on that in a future post) so I need protein/carbs at the right time. My top tips are in the checklist.

Drink
But not the complimentary beer and wine. Alcohol's effects are amplified at altitude (and try saying that ten times fast when you've been getting stuck into the drinks trolley) and so is the hangover. You dry out in the extra-dry atmosphere of the plane anyway - stick to water or weak/herbal tea. And keep drinking it. Make sure your water bottle is in easy reach and keep drinking. Refill it, take some every time they come around with drinks, and generally drink more than you ever usually would.

Sleep
Mid flight you may well feel that (sort of ) like a modern Macbeth, your airline has murdered sleep and therefore you shall sleep no more. With the right accessories, however, you'll be sleeping like a baby.
Warning/statement of the bleeding obvious: I am not a doctor. If I was, I wouldn't have to fly economy class.
I am, however, despite my lack of medical qualifications, a big fan of medication on flights. Clearly you should talk to an actual doctor, but routine involves half a valium before boarding the flight, and a sleeping tablet when I want to sleep. I also take low dose asprin for a few days before, after and during a flight - I figure if I'm immobile, I should try not to get DVT. My GP agrees with this approach, your kilometerage may vary.

It's also important to plan when you sleep - I set a watch to my destination time and then make sure it's somewhere I can see it (I don't like wearing a watch, so I use a cheap plastic one and attach it to something handy). Light, food and adjusting your sleep patterns are the keys to avoiding jetlag, so as soon as I'm on the plane, I'm on destination time - for example last year going to Paris we were arriving in Paris at 6am, which meant we left Australia in the evening. I stayed awake the first leg of the flight (to Hong Kong I think, it's all a bit blurry) and then slept soundly almost the whole of the second. We enjoyed a full day in Paris, saw Notre Dame had dinner and went to bed around 9pm, and didn't have a hint of jetlag. More on jetlag in a future post - my current hints and tips, and I've just download the Virgin Atlantic jet lag fighter app, but I haven't had a chance to test it out yet.

The other things I've listed - a pillow (I'll post a tutorial on making your own ultimate travel pillow soon), a neck pillow and a blanket or the

world's smallest sleeping bag, which I purchased from the link I just linked to (unfortunately, I am not yet an enormously successful travel blogger who gets free products for review, but I'm totally up for changing that if you have something you want reviewed) and which really is TINY, and also warm - and even more importantly, the tallest inflatable footstool you can find (try Inflatable Ottoman - Clear, or google it if you're not in the US, and make sure it'll fit between your seat and the seat in front - a  kids' version might be better if you're not sure, like this one

), are what allow you to turn your instrument-of-torture seat into something that you can pretty much sleep on. orld's smallest sleeping bag

And I can't say enough good things about active noise-cancelling headphones. They block out the low hum of the plane, the sound of screeching children, snoring people, that weird clicking noise... Personally the Cure's exceptionally awesome album Disintegration is my never-fail sleep music (it's all about adjusting your breathing to the tempo of the music - more on that later) so I have a sleeping on planes playlist on my iPod that has Disintegration repeated for about 48 hours (possibly slightly longer than necessary). I also have a backup battery for my iPod like this one

Stay warm
I could really have called this "stay the right temperature", because planes are ridiculously cold at times, and then kind of hot and sticky at others. Layers are clearly the key  - I'll be transporting a what to wear post over from my personal blog, so stay tuned.

Stay fresh
I can't tell you what a difference having a shower when you stop over makes. I always have a partial fresh set of clothes (top, undies, socks) in my handluggage, and whatever I need to shower either in a lounge (if you have access) or pay showers - you feel 1000% better for a shower. If there's no way of having a shower (like if you're on a direct flight, then you need to be able to rely on your ziplock bag contents (coming soon) and a quick wash in the airplane toilet (well not actually in the toilet, clearly) - but I'd still bring some fresh clothes to change into before landing.

Speaking of staying fresh, there's a reason those slippers are on the list - boy do you not want to walk on an airplane toilet floor in bare feet or socks - yuk. But nor do you want to try to sleep in your shoes. The solution? Take off your shoes and put them (in their own bag) in the overhead locker, put on your warm socks, put your slippers under the seat in front of you, and put your slippers on before you go to the loo. Seriously.

Stay entertained
Either you need a big thick book, or if you're me and read stupidly fast, you need more than one. I have solved this dilemma, by buying a Kindle

- without it, my hand luggage is invariably over the allowance, as I need at least three books to last a 24 hour flight, even if I'm asleep for half of it, and you don't even want to know how much of my luggage allowance the eleventy-three books I needed for three weeks in France took up last year (or how horribly overweight my bags were coming home). The Kindle weighs way less. Plus there's the iPod, and I may consider taking the iPad with me, possibly loaded up with a TV show I've missed (like the last series of Dr Who, for example) in case the entertainment system's not working.

And for anything - even listening to the inflight entertainment system - you need those active noise-cancelling headphones, and a spare set of batteries for them, particularly if they're the sort that don't work without batteries. Mine are Sennheisers, like these ones, and they do work without batteries. If I was buying new ones, I'd probably buy these, which are bigger.

So, download the checklist and stay tuned for more information, coming soon.


*I checked, and it is actually true, they're not just asking you to switch things off because they enjoy torturing you.
Image credit: Mollypop, under a creative commons license.
Posted by From the lion's mouth at 11:32 PM